High Stakes Poker was a staple of Poker TV for 98 great episodes, it featured the top pros playing and bantering against each other. 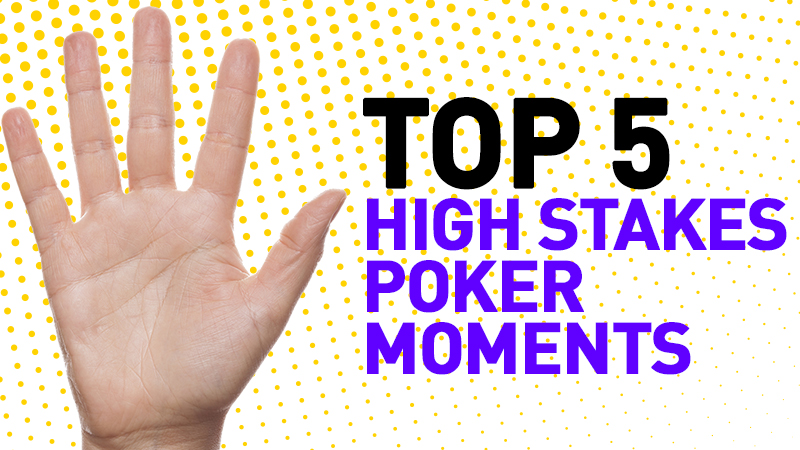 High Stakes Poker was a staple of Poker TV for 98 great episodes, it featured the top pros playing and bantering against each other with veteran commentator and comedian Gabe Kaplan in the booth.

HSP is long gone, canceled after Black Friday, but we look back at our favorite moments from this great Poker show.

Tom Dwan reraises Phil Laak to $24k with 98 of Spades and everyone quickly folds except for Phil Ivey who has A6 of Diamonds.

The flop gives Ivey both an inside straight draw and a flush draw with the ten - king of diamonds and a queen of clubs.

Dwan missed the flop, but he still bets $45.8k. Ivey takes some time and calls.

The turn is a brick, but that doesn't stop Dwan from betting $123.2k. Ivey takes his time and calls.

The turn comes, and it's a six, Ivey missed the flush and the straight but has a pair of sixes as a consolation prize. Dwan has 9 high and bets again, this time to $268.2k and Ivey folds. Dwan wins the $676.9k pot.

Despite what many believed, Phil Ivey is not an actual poker god, it's a standard fold, but not many would've tried to bluff that amount of money on that board with 9-high! That's why Dwan is a legend.

While it's debatable if Daniel Negreanu can still keep up with the ''online wizards'', he's definitely a good poker player... but you would never know if you only know him from High Stakes Poker.

His legendary bad run is perhaps better exemplified by this hand against Gus Hansen.

Turn is a five, giving Gus quads and Daniel a full house. Gus once again bets $24k and Negreanu calls.

The river is a brick, Gus checks, and Daniel convinced he has the best hand, bets $65k. Gus, perhaps realizing that he's not going to scare him away, goes all in and Daniel calls, losing the $575.7K pot.

Alan Meltzer 4 bets with Kings and Tom Dwan calls with Jack-Ten Off.

The turn changes everything with a jack of diamonds, giving Dwan a two-pair, Meltzer checks. Dwan bets $46.2k and gets called.

The river is a jack, giving Dwan a full house. Dwan overbets with an all in and, surprisingly, gets called! He gets the $514,400 pot.

Elezra 4-bets preflop with kings to $40.5k, and Galfond calls.

The flop is a King and two 9s. Giving Eli a full house and pairing Galfond's King. Eli bets $33k and Galfond calls.

The turn is another nine, giving Galfond a weaker full house. It goes check-check, and the river is a brick.

Eli bets $110k, and it seems all set to get full value out of his hand.. but Galfond folds his full house!

The pot was $264.6k, but that's less impressive than Galfond's fold.

Yes, Tom Dwan again, he used to win so much while on High Stakes Poker that other players started saying ''We're getting Durrred'' instead of cursing. But we saved his best for last.

The hand started with a reraising war that inflated the pot to $134k before any player could see the flop. Lederer had Ace-King of Diamonds and Tom had  86 offsuit.

The flop is 3-2 of spades and a Queen of hearts, and it goes check-check.

The turn pairs Dawn's 8, but he still checks back to Lederer and does it again on the river, a nine of diamonds.

The pot stayed at $134k. But Lederer's face? Priceless.