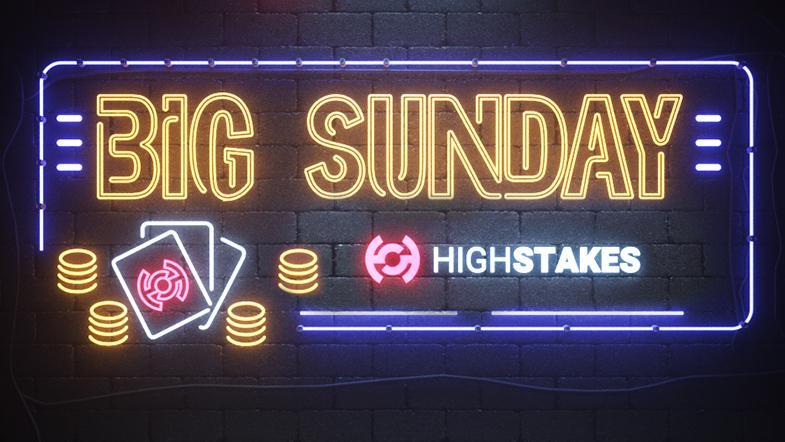 You can never have too much of a good thing as far as poker goes, and what that means for HighStakes fans is another running of the Big Sunday festival, this time in early February and with the guarantees doubled to €200k!

Sunday, February 2nd is the date for your diaries and you can start your qualifying attempts to grab seats, satellites now open in the HighStakes lobby.

What you’re aiming for is a chunk of the huge cash on offer across 30 separate tournaments, ranging from freerolls to high stakes MTTs.

The flagship Main Events will be the star attraction, with €25k GTD in each of the three versions and plenty of big-name pros expected to turn out.

Last week’s Big Sunday saw Joseph ‘subiime’ Cheong walk off with his second HighStakes ME title and scooping €8600 ahead of a tough field.

Triple Crown Bonus of T€10k on the line

We’ll see if he can do it for a record-breaking third time next month, but there were plenty of other big success stories – and many will be hoping to repeat the Triple Crown triumph landed by ‘used2bcool’.

That meant €10k in tournament entries for the the HighStakes reg, so you can expect to see them play almost every tournament next month, hoping to run up another string of cashes.

It won’t be easy going, however, with 80%+ of players expected to be qualifiers and planning the same assault on the Big Sunday schedule -but the potential for life-changing money is there for you to grab.

Last time out the €100k guaranteed was smashed, an extra €40k in the total prizepools, and who knows what the February edition will have in store.

The buy-ins, as mentioned, are designed to suit every bankroll, from freerolls up to the €1k highstakes action, and the clever players will do their best to run up some satellite entries to make it a cheap and profitable Sunday when it arrives.

You can check out the full satellite schedule in the client. They are already underway so you can join in the fun and secure your Big Sunday seats immediately.

As ever, the action will be streamed on Twitch, one or more top TwitchTV poker personalities sharing insights and hopefully deep runs throughout the day.

For all the Big Sunday details, come back here, and hopefully we’ll be reporting back on your successes this time next month!